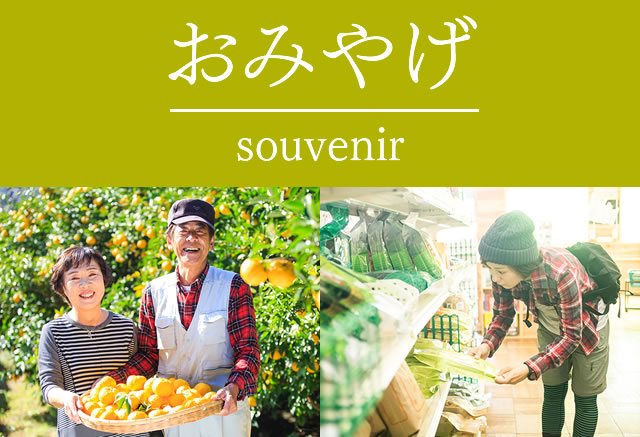 Products made of local food and materials for your souvenirs.

Mie prefecture is the third most famous tea production region in Japan.

Odai town produces higher quality “Ise tea” among teas produced in Mie prefecture and often wins prizes in many tea competitions in Japan. Eastern part of the town is the major tea production area in Mie prefecture. The climate, especially the dense fog along Miya River, is perfect for the tea growth and the thick grown tea leaves are told to retain rich taste and flavor over roasts. The first tea leaves picked in early summer are known as top rate tea and are characterized by its nutrition and the richer taste and stronger sweetness.
Odai tea is available throughout the souvenir shops in town.

Gensakasyuzou, inc., located along old-Kumano Street in eastern part of the town, was established in 1805 and has been making “Sake” with clear and bountiful water sourced from Miya River and local rice “Ise nishiki”.
The representative brand “Sakaya hachibei” lines up great variety of Sake from authentically brewed one to Junmai-Daiginjo. Recently the brewery is developing new products such as liquor called “Orange Bear” with Kumano Orange and its brewed Sake.
These Sake can be purchased in Road station “Oku-Ise Odai”, Oku-Ise forestpia and alcohol retailers in town.

Ayu grown in clear water of Miya River tastes less oily and flavorful. Juvenile fish grown in subsoil water are released in Miya River every year and Ayu season come to town with lifting of the Ayu fishing ban in early summer.
Summer Miya River gets busy by the fishers from in and out of the prefecture. Throughout the season people enjoy the fresh Ayu dish at Ayu restaurants in town. Processed fish products are popular choice as souvenir.
Raw Ayu are purchasable at shops in summer. Frozen and processed Ayu foods are available all through a year.

The upper reach of Miya River - designated as the clearest river in Japan - in Mie prefecture is also a divine mountainous area where ancient Ise shrine cut out its architectural materials. The woods produced in this area were shipped and distributed to Edo, the ancient Tokyo as precious “Oyamasugi” or “Miyagawasugi”.
The wooden craft experts of nowadays are producing practical and durable wood work in each processing place. Custom-made tables, benches and furniture can be ordered.

Mie prefecture is a famous production area of great variety of Mochi, a round shaped sweets made of sticky rice. Mochi culture has its origin in growth of tea shops where people walking in town to Ise shrine were treated with Mochi. Good water and rice are the hidden reason of the tasty Mochi in Mie.
Magnolia-Dango – a kind of Mochi – is a popular one around this town and people originally ate this when they took rest during work in rice fields. Fresh smell of Magnolia leaf has bactericidal effect.
Naisho-Mochi, meaning secret Mochi, was too tasty to eat in public and people made this in secret. This is a story for its name. Local groups and shops make other characteristic varieties such as “Pochari-Mochi” – soft Artemisia Mochi with tasty red bean paste –, “Sawa-Mochi” made in Matsuzaka and Ise area for ages.

Bounty from rain and clear water.

In recent year Chinese orange production grows and they are processed into sweets and seasonings. “Yuzukko”, “Yuzuno sanshimai”, “Yuzu kasuteira” in cute package are nice choice for souvenir and processed products of butterbur and mushroom are perfect with rice.
The source of Miya River are from Odaigahara woods where total amount of rainfall reaches 4,000 ml per year. Packing this water in plastic bottle, it is sold as “Mori no bannin”. 36 degree of hardness, it is suitable for drinking and cooking.
“Odai sweets” are recommendation for a sweet tooth. Processing places are creating new products with Mie’s special tea and Sake. Tea dacquoise, Sake manju, Japanese and western sweets, mousse are sold in following sites.